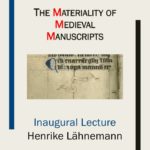 Henrike Lähnemann’s Inaugural Lecture for the Chair in Medieval German Literature and Linguistics on The Materiality of Medieval Manuscripts took place on 21 January 2016, in the Lecture Theatre of the Taylor Institution, followed by a reception, 6pm. Now online! See also the News item on the St Edmund Hall page

Focus of the lecture was the new acquisition of the Bodleian Library, an illuminated and glossed Psalter from the Cistercian abbey of Medingen, written and illustrated by the cantrix Margarete Hopes around 1500, then annotated and altered through the early 16th century. The (sometimes scandalous) story of how the manuscript was produced, annotated, augmented, dissembled finally happily reunited in Oxford provided the starting point to look at a cultural history of manuscripts. The complex composition of the Psalter with sewn-in cloth, heavy use of gold, multiple layers of illumination and heavy reworking raises important question about the materiality of manuscripts especially in the period when the parallel production of prints started.

A Masterclass ‘Medingen Manuscripts’ on 22 January, 10-12noon in the Weston Library, offered the opportunity to inspect the Psalter in the context of other manuscripts from the convent held in Oxford.